Firsts.  Life is full of them.  From the first steps we take, that first cumbersome kiss, first loves and even our first jobs.  Beautiful memories that collect over a life time of first things.  I am sure that each and everyone of us can recount at least some of the firsts in our lives.  But, as we get older and we learn that some of the firsts are the hardest and most painful memories we will ever know.

As we lose people in our lives there are many firsts in that year after.  It seems to me that the older you get and the closer those you are losing are the firsts are harder.  When my mother-in-law and sister-in-law passed away it was the bigger moments.  Christmas, birthdays, anniversaries, months all of those firsts were painful.  But I watched my husband and daughter struggle more with more intimate time.  The first Monday, the first week, the first month.  When mother died, it was the same with me.  When dad died, it was even more intense.  With mother, dad and I shared those firsts but with dad there was no one to share those most intimate monumental firsts with.

There are two really special people this Christmas that are living those monumental firsts.  One couple lost a dad, the other his wife.  I have lifted both in love and peace but I know how hard those firsts are.  I hope that both are surrounded by other people that love and understand the pain they are living in.  I hope that both families are supported with such intense love and peace that these firsts will be memories to share.

As we go through this season of love and giving, let us hold the ones we love close.  Take a moment to listen and learn, a moment to give peace and happiness, and a moment to remember all those wonderful firsts, the first step, the first kiss, the first love. 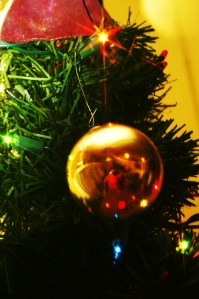 There are so many things weighing on my heart this season.  It seems that the older I get the more I become a traditionalist.  Christmas trees and decorating for the season have always been a big thing in our holiday arsenal. I would like to share some stories of Christmas’s past.

There was once a little white Christmas tree, you may have seen it years ago in the store front of Rona’s.  It was  tiny little white tree that was made of the same stuff as the garland back then.  When Rona decided to close the store, she gave me this little tree.  I wasn’t allowed to put it up because John didn’t believe in “fake” Christmas trees.  So, I put it into storage.  After moving to San Angelo and back, I decided that the little tree needed to be part of our decorating.  I would put up the live tree, but “Charlie” would earn a place either in the den or on the dryer in the utility room.  I took him out of the box and as all plastic garland some of his fluff had faded with age.  His base had been lost somewhere in the move so I found a plastic Christmas flowerpot and filled it with plaster of paris to give the little tree a new base.  I wrapped him in white lights and set him in front of the utility room window.  He immediately fell over.  The base wasn’t wide enough to give much support so I grabbed a can of green beans and put in the base and gave the tree stability and a tree skirt to cover up my faux pas.  For several years “charlie” adorned the utility room.  Every year he shed more and more of his white plastic but every year I loved him more and more.  After the fire in Slaton, moving to Lubbock, I asked my friend Renia if she would throw Charlie in the trash.  He had more than out lived his life.  I loved Charlie for more reasons than just his existence.  He reminded me that giving out of love and kindness still exists.  He reminded me that it didn’t matter what someone looked like, their actions were their true beauty.  He taught me that at the end of our existence it is those we love and trust that help us to let go.

Like I said before we always had to have a real tree.  I finally made it a game to see how big and wonderful a tree I could get with the least amount of cost.  It became a game.  This started because I always ended up paying for the tree, and that money was usually supposed to be for gifts, Christmas dinner, or sometimes utilities.  Whatever the reason it seemed that buying a Christmas tree every year was a waist of money.  When I was going to college, the end of the fall semester I would sell my books back to have money for Christmas.  Some years were better than others.  John bought 3 gifts.  Each had only his name and the receiver on them.  His mom, Kristen, and me.  Everyone else was my responsibility, including Santa.  So one year when we lived in San Angelo, I had gotten all the gifts, all the groceries, and all the utilities taken care of but the one thing that was missing was a tree.  Funds were tight because I was the only one working.  One evening after work, about three days before Christmas, I stopped at Wal-Mart to pick up something for supper.   I noticed they had fresh trees on clearance.  There were three left and they were all still wrapped in netting.  I wandered down and looked at the price on the tree of them.  3 dollars!!  I went back to the car to see if I could find enough cash and change to purchase one.  The boy in the gardening department helped me tie the still wrapped tree to the top of the trunk lid.  I was so excited even though I had no idea what this tree would look like when I got it opened.  I found some boards to make the tree a stand and got it standing upright.  I began to cut the netting off to let the tree branches fall.  It was the prettiest, fullest, most amazing tree that just fit into the living room.  That is when I knew that it really didn’t matter what something cost, it was in fact more about the beauty it brought into someone’s life.

As time would have it, I now own a very beautiful “fake” tree.  It is 8 ft tall, pre-lit, fiber optic that is amazing in the dark with a fire in the fireplace.  I have several smaller trees including a white ceramic with red doves on it.  Sadly, this will be my year of no Christmas tree.  My trees are in storage and there is not enough room in the apartment to put up even a small tree.  When I was gone the other day and Kristen was off she decorated the apartment for Christmas.  Pulling from a box a small tree that is about a foot tall, pre-lit and pre-decorated.  I just can wrap my head around not decorating for the holiday.  It is as if the season does not exist.  I have spent several days trying to come up with a lesson, something positive, something I needed to learn.

I have indeed learned that the holiday season is not about the decorating, it is not about presentation.  It is about what lives in my heart all year long.  It is about loving others, it is about being compassionate, it is about helping others and giving to others.  I have been watching people this season, and I wonder why they cannot be all those things throughout the year?  Why do they seek out people that are in need during this time of year?  Why not do something ALL year to help others?  In a year with incredible changes in my life, I for the first time in my life I have wants for Christmas.

Miracles actually would define my Christmas wishes.  Although I am quite aware of the miracles that have come to pass over the past few months.  The reason for the sudden move to Austin was John’s health.  It wasn’t something that I really let known to the public.  In June, John nearly lost complete use of his left hand.  Thinking it was a spider bite, I began treating the swollen had as such.  A trip to a doctor in Austin, proved that it wasn’t a spider bite.  Not that we ever really found out what was going on with it, blood work showed that his cholesterol (both good and bad) were off the charts, his triglycerides were also off the charts, and his core blood sure was also very elevated.  As much as I have things I love about living in Brown County, they are not a medical type place.  The hospital, coming from Lubbock with actual medical care, was scary at best.  Even their main cardiologist died on the chopper ride to Ft. Worth because he refuse to let them work on him.  I had battled the whole time we lived there trying to keep our diet healthy.  But Brown County has to have EVERYTHING shipped in, so even fresh veggies were not so fresh.  There is not much top soil so any garden areas that are there have to have soil shipped in and with the drought and no real ground water garden was a mute point.  So we came to Austin, my promise to John was if he would let me, I could save his life and make the things that were wrong physically better.  I kept my promise and as we found him an new doctor in November he stepped up on the scales 80 pounds gone since the last doctor visit in June.  Blood was drawn and his next appointment was two weeks out.  Friday before Thanksgiving, he went in to know the readings of his blood work.  On the scales, 12 more pounds lost in two weeks.  His blood work is all back in normal range and we have had to dig out his smaller clothes.  Yes, I know what miracles are.  And if you want to know how this diet works give me a shout cause you will be so surprised!!

Remember this is a season of miracles, a season of showing love.  Take the opportunity to love others, but don’t forget to love yourself too.  Love and blessings!~!~!